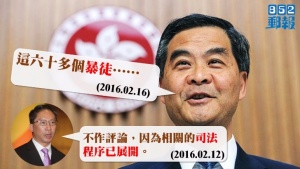 “Corrupted conduct of a public officer as senior as Chief Secretary would no doubt be committed secretly and insidiously. It is naïve to think that such an officer would necessarily leave a trail for his corrupted conduct to be detected. Further the corrupted conduct could simply take the form of an approving nod or a knowing wink and it would not be possible in such cases to identify any specific or generic act of misconduct. However, it did not mean that the failure to allege or prove such approving nod or knowing wink would mean that a charge of misconduct in public office could not be established when the officer in the position of Rafael Hui, having received very large sums of money, agreed to be or to remain favourably disposed towards his “paymaster” in his official capacity.”

“It will be a sad day for Hong Kong if senior public officers, such as Rafael Hui, could accept large sums of money and agreed to be favourably disposed towards their “paymasters” in their public offices with impunity because the money or other advantages were paid before they assumed or after they left public office.”