“Sunday’s election for Chief Executive shows the people of Hong Kong’s legitimate demands for universal suffrage and true representative government remain unfulfilled,” said Rubio. “Beijing’s clear interference in these elections is yet another example of a precipitous erosion in Hong Kong’s long-cherished autonomy. Ominous reports emerged today, hours after the election results were declared, that several Umbrella Movement leaders are facing a new round of charges stemming from their involvement in the pro-democracy protests. It is incumbent upon Chief Executive-Elect Lam to take meaningful steps toward reforms consistent with the democratic aspirations of the people of Hong Kong—aspirations which animated the 2014 Umbrella Movement and which remain alive and well today.”

“Chief Executive-Elect Carrie Lam was clearly Beijing’s favored candidate, just like her predecessors, and this will make it exceedingly difficult to deal with the constant erosions of Hong Kong’s autonomy and rule of law,” said Representative Smith. “It is in everyone’s interests that Hong Kong remain a free and prosperous bridge between China and the West, but the city’s unique vitality and prosperity are rooted in its guaranteed freedoms. If Hong Kong is to become just another mainland Chinese city under the new Chief Executive’s leadership, we will have to reassess whether Hong Kong warrants special status under U.S. law. We hope Chief Executive Lam will defend the rights and democratic aspirations of Hong Kong’s people because, in the long run, the Hong Kong model is the best hope for a rights-respecting and prosperous China.”

CECC Analysis of Chief Executive (CE) Election: A new CECC analysis of the election concludes that Chinese central government officials sought to determine the outcome of the already highly restricted CE election by pressuring Election Committee members to vote for Carrie Lam. National People’s Congress Standing Committee (NPCSC) Chairman Zhang Dejiang reportedly asserted the central government’s “right to step in” to the CE elections. The election itself was limited to 1,194 voters, denying Hong Kong residents a meaningful voice in their government. According to the CECC analysis, such actions are inconsistent with Hong Kong’s Basic Law and Hong Kong’s obligations under international law. Article 22 of the Basic Law says that no “department of the Central People’s Government…may interfere in the affairs” of Hong Kong, while article 45 provides that the “ultimate aim” is to hold elections for CE by universal suffrage.

Hong Kong Human Rights and Democracy Act: Senator Rubio introduced the bipartisan Hong Kong Human Rights and Democracy Act (S. 417) in February 2017 in order to reaffirm the United States’ historical commitment to freedom and democracy in Hong Kong at a time when its autonomy is increasingly under assault. An earlier version of this legislation was introduced in the 114th Congress by Representative Smith in the House of Representatives.

CECC Statements and Events on Hong Kong: The CECC has held public hearings and events and the Chairs have issued public statements on political and rule of law developments in Hong Kong, including the cases of abducted booksellers. Disappeared Hong Kong bookseller Gui Minhai’s daughter testified at a CECC hearing in May 2016. The CECC’s 2016 Annual Report has a chapter on human rights and rule of law conditions in Hong Kong. 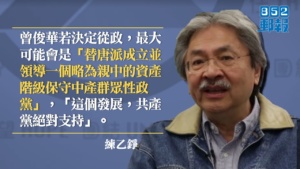