Housing Development Above Transport Infrastructure As A Land Option

1. Introduction
a. This paper follows up on the suggestion given in paragraph 12 (b) 2 of the paper dated 1 August 2017, submitted by the Hong Kong Countryside Foundation to the Chief Executive and relevant policy secretaries. The TFLS secretariat notified HKCF on 28 December 2017 that the paper was circulated to TFLS members.
b. That paragraph advocates that Government and the Task Force on Land Supply should take up the option of securing land for housing by making use of “potential podiums above infrastructure, utilities, highways, railways, and roadside areas”.
c. This paper explains that this option could release significant amounts of land within a shorter time frame than many other options. It is shown by way of examples that sizable pieces of land currently occupied by transport infrastructures exist, which are large enough to accommodate typical public housing estates so long as one is prepared to think out of the box and adopts a 3-dimensional approach to land zoning.
d. TFLS is urged to present this recommendation of the Hong Kong Countryside Foundation as an option for the public to consider and prioritize in the coming comprehensive public consultation.

2. The concept
a. Traditional town planning assigns land use zones on a two-dimensional plan. In Hong Kong, only one land use label is applied to each zone marked on Outline Zoning Plans published by Government. It serves as the basis of the administrative and enforcement work of Planning Department and Lands Department.
b. However, as land resource becomes scarce in densely populated cities, a pattern has emerged in which two or more different uses are stacked on the same footprint in many countries. Examples are public parks, commercial plaza and residential building built above roads and highways. This amounts to the adoption of a 3-dimensional approach to town planning, in which vertical partition of space is implemented to accommodate diverse uses of land..
c. In Hong Kong, the concept of transport infrastructure and other land uses co-existing above the same footprint is not new. A well-known example is the elevated road which runs through Yaumatei Carpark Building. Several housing projects are built on the land of railway stations and depots. An early example is the Metropolis Residence Towers above Hunghom Station. Nowadays, many building developments sit on top of MTR stations.
d. HKCF’s recommendation to build on podiums above highways, railways, etc. is a manifestation of this 3-d town planning approach. The key is to enable residential/commercial/public uses and transport infrastructure share the same footprint but occupy different vertical levels.

3. Advantages of the concept
Recent advocates for more extensive applications of this concept in Hong Kong include Vincent Ng, ex-President of Hong Kong Institute of Architects. The advantages of the concept are “quick supply of land, quick improvement to environment of the district and savings in the development of land resource” (ref.1).
Land occupied by roads and railways is brown-field land. The use of such land for housing development conforms to the “brown field site first” principle. Thus it would reduce potential opposition from people concerned with conservation.
Furthermore such sites are typically Government land so that no land resumption is required. The development of such sites may proceed in earnest without complications arising from negotiations with private land owners or tenants.
There is no need to incur any expense of the same order of magnitude as reclamation in remote parts of Hong Kong waters. There is also no need to build major transport infrastructure since road and railway transport are already there. Development on transport infrastructure land is thus a much cheaper option than reclamation.

4. Overseas Examples
Many examples already exist elsewhere in the world. An example involving an area of around 10 hectares is found in Boston, USA. Over a stretch of about 800 metres above Interstate 90, a platform is formed to accommodate a cluster of buildings, including residential apartments, hotels, commercial buildings, shopping malls and open space. Among them is Prudential Tower, a 52-storey building with 110,000 sq. metres of floor area. It shows that development of this scale above roads is feasible in engineering terms and that building above roads for residential purpose is practical.

Another example of a smaller scale is the Washington State Convention Center in Seattle. It sits on a platform of around 2 hectares formed above Interstate-5. 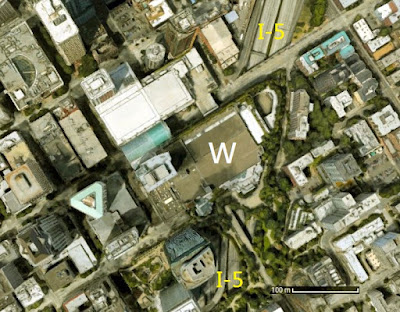 b. Coastal strip at Ma Liu Shui near the Chinese University of Hong Kong
Area: about 3 hectares. The site is only slightly smaller than that of Wo Che Estate in Sha Tin. 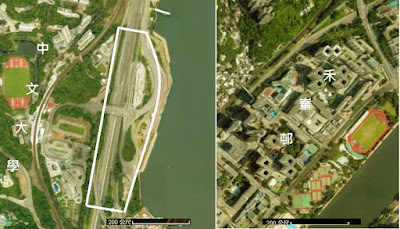 c. Large roundabout in Yaumatei
Area: about 10 hectares. The site is large enough to accommodate So Uk Estate in Shamshuipo. 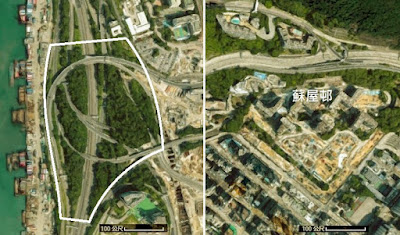 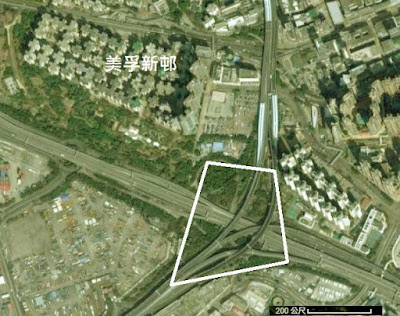 e. Road network between Mei Foo Sun Chuen and the Container Port (including some open-air car parks)
Area: about 8 hectares. The site is only slightly smaller than the southern half of Mei Foo Sun Chuen. 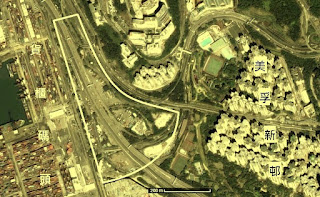 6. Likely objections
It is understood that Lands Department has traditionally opposed the concept of developments above roads which reflects adherence to the 2-dimensional understanding of land zoning. But it is no longer in keeping with prevailing circumstances in which Government’s established policy has shifted towards allowing different uses to occur at the same site. This established policy position is amply confirmed by residential development projects above MTR stations, underground flood-water buffer reservoirs beneath playing fields in Happy Valley and Tai Hang Tung, and the use of caverns to house government facilities (such as sewage treatment works, service reservoirs, refuse transfer stations).
Air pollution from cars may be said to be a concern. But the Boston example has shown that this could be managed. Anyway, numerous Hong Kong residential buildings are located right next to busy roads. Air pollution cannot be treated as a deterring factor.
Engineering difficulties may be quoted as another cncern. However both examples from Boston and Seattle show that substantial buildings can be constructed above major roads of considerable width. Furthermore the difficulty and cost are definitely less than re-provisioning a container port, a proposal which the Task Force on Land Supply appears to be willing to present to the public as an option for land supply.

7. Conclusions and Recommendations to TFLS
From the above discussions and the examples from overseas and locally, it is clear that building above transport infrastructure is a quick, cheap and engineering-feasible option to secure sites of significant size for housing development.
The five potential sites presented in this paper alone would provide some 50 hectares of land which are easily accessible by public transport and therefore favourably located for housing development. They could therefore serve as short- to medium-term solutions for increasing land supply in Hong Kong. It is believed that more sites of similar nature could be identified given more effort.
It is therefore recommended that TFLS:

i. Take note of and affirm the established policy of allowing different land uses stacked vertically above selected land parcels, that is, the application of 3-dimensional approach to town planning;
ii. Urge Government to:
1. instruct Planning Department and Lands Department to adapt themselves in recognition of the established policy of 3-d town planning and vertical stacking of land uses;
2. study the five potential sites and to identify further sites in Hong Kong suitable for housing development above transport infrastructure;
iii. Adopt housing development above transport infrastructure as a land-supply option to be presented to the public in the coming consultation exercise to seek public views and to establish consensus on the prioritization of various land supply options.