轉載│被趕外籍記者撰文：So, what the heck happened in Tuen Mun yesterday? Richard今日在facebook撰文，講述更多經過。當中提到，「我不會形容這是對抗，因為真正搞對抗的只有警察（I wouldn’t describe it as a fight, as only the police were truly fighting）」。《852郵報》獲授權轉載整篇文章，全文如下。）

So, what the heck happened in Tuen Mun yesterday?

Regarding the actual protest and what happened, it was largely an orderly and peaceful affair meandering through central Tuen Mun to protest at the smugglers domination of the town. What was interesting was that I never heard, saw, or was told about any local residents objecting to the march. I would say that the vast majority of the local residents supported the march and welcomed their daily plight being acknowledged by outsiders.

Once the march ended the tone changed. By this point there was at least 500 people packed into the main square and without any kind of leadership the groups began to split into small splinter groups of between 50-100people. These groups seemed to be led by locals, who knew where all the main smuggler shops in the area were.

We arrived at one smuggler shop with about 100 protestors and blocked everyone in. There was chanting and shouting but no violence towards the shop. About ten minutes later the first police arrived. They lined themselves up in front of the shop, despite there being no actual threat of real violence. After another ten minutes, everyone decided to leave, as we exited The main Tuen Mun Mall called, Trend Mall, we ran passed a group of about 10 policeman who had been sent as reinforcements. They were left in a quandary as to whether they should follow us, or go to the shop we’d just left.

The group I was with had no doubt heard that in another Mall the police had already used pepper spray, so they’d decided to change venues and show support. Here is a critical point that you should understand, we had arrived at the smuggler shop and completely blocked it, but there was no violence, because the police hadn’t arrived. Yet in a completely different location where the police were they’d already used pepper spray. The video of this is on the web. You can see clearly, the most that happened in that Mall was some shoving and defiant standing of ground. No actual violence against police.

After another twenty or so minutes of standing in the main square, another splinter group broke off and headed back to the shop we had first visited. What was originally a small splinter group quickly formed into the entire force going back into Trend Mall. Not knowing the layout of Trend Mall and fearful of being trapped inside, I remained outside for about 15minutes, not realising that Trend mall has dozens of exits. I watched at least 300 protesters enter the Mall

We could hear chanting and jeering up stairs, but nothing that would indicate that there was any serious trouble going on.

Suddenly a team of about 8 police officers ran through the main doors heading for the second floor, we immediately followed directly behind them up the two escalators. When this small team of officers reached the top of the second floor they were blocked by crowds. They immediately ploughed into the crowd and all hell broke out. I was directly behind the police officers so could see everything. I wouldn’t describe it as a fight, as only the police were truly fighting, but the police were totally outnumbered and being met with stiff resistance as the protestors refused to budge. There is no doubt in my mind, had the crowd wanted to attack the policemen like in any other city in the world, these policeman would have had no power to stop it and would have been easily over-powered.

It was altogether a ridiculous move on behalf of the police and shows just how much they abuse the protestors passivity. The scrap lasted a good few minutes and the police were definitely in a tight predicament of their own making. At least one policeman and two protestors were down. Pepper spray was being sprayed indiscriminately like they were spraying cockroaches. It was a complete mess, the police weren’t protecting anything, they just bowled into the crowd fighting. Interestingly, it is now clear from the videos, that it is exactly the same police team that had used pepper spray in the previous Mall that came barging into the crowds at Trend Mall. So, they had effectively come from that incident bringing the same level of intensity with them.

I want to point out again here, we had been in Trend Mall with a 100 protestors just 45minutes prior and there were no police and no violence. Now the police were here and everything was in meltdown.

Within minutes of the pepper spray being fired another 10 or so policemen came up the escalator and reinforced the small corner they were blocked in. Within another 5minutes of that, the police hoisted their red flag and attacked the crowd again, dragging protestors onto the floor to arrest them. As I watched the spectacle, it seemed that the wisest thing the police should have done is retreated. The crowd was not unruly, it wasn’t smashing or breaking anything, it was just there. Which confirms a point I’ve already made several times that the police whether by order or just shear stubbornness do not want to give up an inch of territory and will therefore use any amount of violence on the crowds for just being there. For them illegal assembly is Route One to violence now. The violence is not justified because they simply aren’t receiving anywhere near the same amount of violence back.

In these situations, I know the police are scared. I also get that large crowds are intimidating, but as police officers, who are paid well by the tax payer, they need to manage themselves professionally and simply attacking crowds because they are there is just plain stupid and unprofessional. If it were a gang of triads, they wouldn’t use the same level of violence as they would have a full on fight on their hands. These direct action groups of young people never assault the police and it’s akin to watching a lion take down a farmyard cow and the lion complaining because the cow swung its head too hard while it was using both its teeth and claws to maul. The fights are always one-sided with the crowd only shoving and the police swinging batons at anything that moves.

After a few minutes of scuffles, the situation stabilised somewhat, and I was then singled out by a young policeman who bundled me down the escalator for no other reason than he was pumped up from the fight. After this, a number of lower level skirmishes happened all over Tuen Mun, but not nearly to the same intensity. The main fracas in my opinion was caused by the group of policeman coming up to a large crowd at level 10. What did they expect?

So, having established what happened, the main issue is WHY did it happen. Just why were the direct action groups there and why are they willing to be attacked time and time again by an angry and frustrated police force? This I will explain in the next post.

The photo is the smuggler shop the first time we visited after the police arrived. You can see, it’s calm. It’s not chaotic. Once the police arrive in numbers they start throwing their weight around and this is what causes the conflicts. 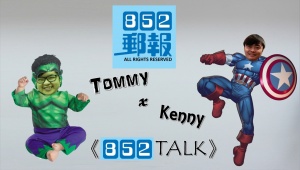